‘Spat on and ignored’ 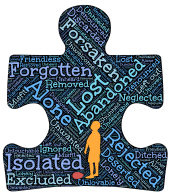 I was really moved by an article in the Guardian this month about medical student James Beavis who spent Christmas 2016 on the streets of London to raise money for Crisis (the UK national charity for single homeless people) and in order to better understand homelessness.

He reminds us that “… homelessness can affect anybody. The number-one cause is relationship breakdown … And the number of rough sleepers is rising …”

“The reality is that society has dehumanised homeless people. They are seen as intimidating – but during my time on the streets, it’s not the homeless community I’ve felt afraid of; it’s some of the general public who have made me feel intimidated and vulnerable. I’ve been spat on, and endlessly ignored. There have been times when not a single person has looked at me for at least two hours.”

On the other hand, he mentions moments of kindness when strangers left him food while he was asleep.

I don’t know about you but particularly at this time of year when I’m scraping ice off my car windscreen, or I come out of the cold into my centrally heated home, I often wonder what’s it’s like for people sleeping rough.

Which is one of the reasons I’m involved with my local homeless charity: Worthing Churches Homeless Projects. The people I’ve met there come from all sorts of different backgrounds – they just have homelessness in common – and, as James says, it could happen to any of us.