Are You an Orchid or a Dandelion?

Orchids are beautiful but sensitive flowers.

They require protection and nurturing to blossom.

On the other hand, Dandelions can thrive virtually anywhere.

I came across this way of explaining how some of us develop differently from others when I was catching up on old episodes of Channel 4’s ‘The Secret Life of 4 Year Olds’.

It’s based on a Swedish metaphor: ‘amaskrosbarn’, a “dandelion child” and ‘orkidebarn’, an “orchid child.”

The theory goes that ‘orchids’ are sensitive to their environment and need nurturing, encouragement or support in order to thrive whilst ‘dandelions’ are resilient, can survive pretty much anywhere and although they might appear ordinary on the outside, they have a strong core.

How much of the ‘dandelion’s’ strong core is determined genetically and how much is learned/developed is still up for debate but research is underway. For ‘orchids’, stress during childhood may also be a factor.

A 2015 article in Psychology Today by Christopher Bergland quoted studies by Dustin Albert and colleagues at Duke University which explored the impact of ‘orchid’ children not receiving the support they need and that this might lead to mental health and other life problems later on. They also indicated that, with proper nurturing, even the most vulnerable ‘orchid’ children can grow up to be exceptional.

I really like this metaphor – however I also recognise that we can all benefit from having the right environment and support – see Malcolm Gladwell’s book ‘Outliers’ which has some really good examples.

Having said that, I can see that some of us (who could be a bit more orchid than dandelion) might need more encouragement than others.

A good example of the effect of receiving the right support at the appropriate time was Charlotte and Jonathan’s audition for the TV show Britain’s Got Talent in 2012 – see how having Charlotte by his side enables Jonathan to really shine – the whole clip is 7½ minutes but the point is made in the first two – after that it’s just about enjoying the performance:

This was also cited in an article on Real Leaders by Will Marre in terms of thinking about of how organisations can nurture and develop the talents of their people.

He quoted experiments which show that:

“… people with a super sensitive genetic make-up definitely do worse in adverse environments but absolutely zoom in supportive ones.

… zoom past dandelions on a host of performance measures. While not everyone with ADHD, depression, and dyslexia is a genius, a disproportionate number may be extraordinary. The lesson for leaders and parents is that one sure way to fail is to treat everyone the same.”

“… Maya Angelou said famously, ‘The quality of strength lined with tenderness is an unbeatable combination.’

My aim as the father of a 7-year-old is to educate and nurture my daughter to be both resilient like a dandelion while maintaining the sensitivity of an orchid—regardless of what her predetermined genetic temperament might be.”

Maybe some of us/most of us are a mix of the two? Perhaps it’s a continuum and we move up and down at different times or about different things?

It could be that there are some aspects of us that are dandelion, and come more naturally, and there are other parts of us that are more orchid? The orchid part could be  a talent, a goal, an aspiration about which we’re more reticent and, in order to explore/express it, we need a bit more encouragement and support. 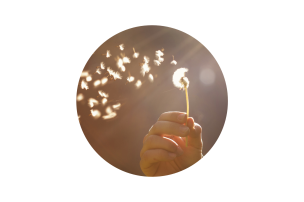 Finally, a word on the dandelion’s last stage which is rather beautiful – a metamorphosis from flower to seed head when they scatter their seeds to the wind.

I can remember, as a child, blowing gently at them as a game to tell the time – maybe you can. too.

It brings to my mind how ‘elders of the tribe’  have shared knowledge, skills and wisdom with others – a lovely way to look at coaching and mentoring and, as Bergland says a completion to ‘the circle of life’…

Upcoming Workshop: Working with grief and loss – how has this been affected by covid?

On behalf of Arun Counselling Centre